Barga is a medieval town and comune of the province of Lucca in Tuscany, central Italy. It is home to around 10,000 people and is the chief town of the "Media Valle" (mid valley) of the Serchio.

Geography
Barga lies 35 kilometres (22 mi) north of the provincial capital, Lucca. It is overlooked by the village of Albiano, a località of Barga, which in the 10th century was the site of a castle protecting the town.
Pania della Croce, a mountain of the Apuan Alps, dominates the surrounding chestnut trees, grape vines and olive groves. 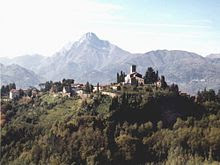 View of Barga
Founded by the Lombards, the city grew as a castle surrounded by a line of walls, of which two gates (Porta Reale and Porta Macchiaia) have survived. The town was well known during the Middle Ages for the manufacture of silk threads which were exported to major centres such as Florence, its mills powered by the hydraulic power of the nearby creeks. In the Middle Ages, Lucca and Pisa battled frequently to conquer the wealthy town and the surrounding territory, and for a time Barga was part of the Florentine dominion, later Duchy and Grand Duchy of Tuscany. In 1847 it became part of the Duchy of Lucca, maintaining a certain degree of autonomy, until it became part of the Kingdom of Italy in 1861. Between 1331 and 1859 Albiano owed its allegiance to the Florentine State.The region was part of the Gothic Line in World War II, and was the scene of fierce fighting between the Allies and Germans from October 1944 until April 1945.

The main sights include :
There is an annual international opera festival, called "Opera Barga Festival", and a long running and very successful jazz festival, "Bargajazz". Recently, Barga has become the home of many painters, including John Bellany who exhibit their work in some of the small galleries within the castle walls. The "Sagra" is a feature of Tuscan rural culture; communal meals for several hundred people, eaten in the open air, often in orchards, vineyards or sports grounds. Originally religious celebrations, they are now often used to raise funds for local causes. Each town and village will have its own peculiar sagra: Around Barga from July to September it is possible to participate in a Sagra every night. In Barga itself there is the "Cena in Vignola" in the vineyard below the Duomo, and in August the "Sagra delle pesce e Patate" (Fish and Chips) in celebration of the Barga/Scottish connection. At nearby San Pietro in Campo, there is the "Sagra del Maiale" (Pork), at Filecchio the "Sagra della Polenta e Ucelli" (originally small wild birds, now pheasant), at Fornaci di Barga the "1°Maggio expo".
The Italian Touring Club has recently assigned the "orange flag" of the "Migliori borghi d'Italia" ("Best Villages of Italy"), a distinguished sign recognizing the peculiarity of its beauty and of its quality. Barga has also been, since 1999, the home of the "European Gnome Sanctuary" run by the Garden Gnome Liberation Front.
Barga is the home town of the family of Paolo Nutini (born 9 January 1987) the Scottish singer/songwriter. On 24 July 2007, Paolo was awarded The Golden St. Christopher medal, the highest honour the city can give, to celebrate his extraordinary contributions to Barga and its people.
The frazione of Castelvecchio Pascoli was home to one of Italy's most inspirational 19th Century poets, Giovanni Pascoli.
The area is a champion of Slow Food. The area has many hillwalkers, hunters and mushroom pickers and walking holidays are very popular due the spectacular scenery around the area.
Many of the residents of the area can trace their relatives to those that emigrated, especially to the Americas, Scotland and Australia. This was caused by the great poverty, the lack of opportunity and the closed society that exists even today. For some, they have come full circle as they have returned to retire here. In particular, a significant proportion of the Scots-Italian population of Glasgow and other cities can trace roots back to Barga and the surrounding region, as outlined by Glasgow restaurateur and one-time Barga resident Joe Pieri in his books The Scots-Italians and River of Memory.
QR codes - In 2008, Barga became the first medieval historic centre in Italy to be mapped and equipped with QR codes (2D barcodes) for all of the churches, palazzo's statues, restaurants, bars and places of interest. After a two year trial, the project was released to the public in Dec 2010 under the name iBarga
. Vistors can now get precise up to date information about the city on their mobile telephones and in 10 different languages